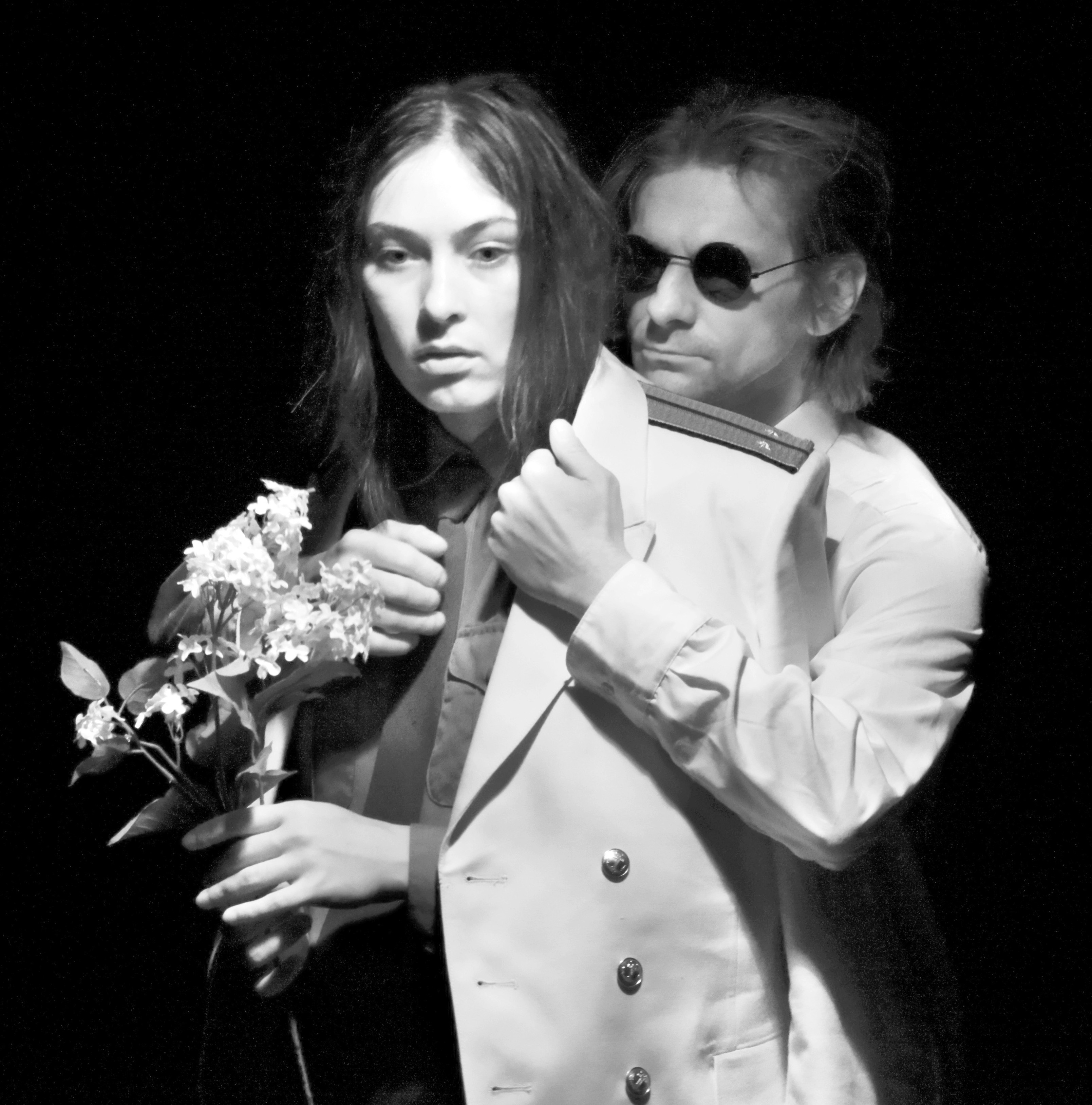 Directed Ledukhovsky united east and west, confession and interrogation, beauty and ugliness. Anatoly Ledukhovsky’s performances always represent a riddle, a maze, a multicoloured ligature of images and meanings. Way out of the maze is not the only one and the image can be seen from different angles. Like the story of the same name, «The Mask» directed by Ledukhovsky is a monologue of a strange and unfortunate mechanical creature made with one purpose – to destroy the enemy of royal power. Monologue of the creature, who will become a human after going through the pain and fatal love for the victim. Action in the performance takes place like in three planes of meaning: investigation, psychoanalysis, confession. Three time spaces, connected with extreme frankness and search for truth, appear through each other like layers of transparent film stock, so as to match at the end and create a kind of the fourth unearthly dimension, the real. Love and blood are usually connected in the Ledukhovsky’s artistic world and his insectlike «Mask» covered with snow was unable to save the victim. Here Lem marks the end, Ledukhovsky puts ellipsis, after which an audience will hear a legend. According to ancient belief, there is a certain carpet fulfilling wishes and saving from evil. The whole world is hidden in the pattern of this carpet. In order not to lose the carpet force, it is necessary that a drop of the blood of an innocent man falls on it once in a hundred years. «And if the story about the carpet is not real, so the one, who invented it, invented our life…». Ledukhovsky used a citation from the fragment of the film by Rustam Khamdamov «Anna Karamazoff». However, the image of the world-carpet, the existence of which depends on a victim, is one of the key images of this film director’s work. This image /as a metaphor of art and creative human/ is close to Ledukhovsky, who quotes almost word for word the dialogue form Khamdamov’s film. Themes of unlimited power and powerful people visibly unite the performance and the film. The internal relationship between them reveals another link in the chain preceding the film. Books by Georgy Gurdzhiev were original sources of the legend about the carpet for Khamdamov. It is in his works one can find a Persian legend connected with the carpet life, an idea of a man as an unconscious machine and an idea that the root of all evil is hidden in unconscious, involuntary, «mechanical» occurrences.

«Mask or Thing In Itself»

Yuliya Bogdanovich and Mariya Galkina are ideal cubism actresses. Their plastic, reflecting the feelings of heroines, deform the accuracy of the habitual shapes of the space as if slicing it in fragments. Shadows, writhing in the dance, breaking on the floor and streaming on the walls, create a feeling of assembling of unconnected movements, at once eccentric, aggressive and seductive with their body liberation. All together is not just a feeling of inconvenience or breaking the reality – the words by A. Brack are more applicable here:  «it seems that you drink boiling kerosene», and I must add that it is beautiful. All together reminds of the atmosphere of films by D. Lynch – a phantasmagorical dream of dark and troubling things, where a red curtain, an optical illusion, a seductive voice and an unintentional act of murder take place. At the same time, the illusion of reality evokes a feeling of horror at fragility and unpredictability of everything happening here. «The Mask» is quite similar, as if it was guessed or stolen from somebody’s dreams. The story hiding something unpredictable attracts, and its visual means don’t let you come to your senses. That is why I think that this performance is created more to be felt by your skin and your inner ear than to be seen and heard by your mind. And after that: fall asleep and see the rest on the other side of eyes.

It is important that the audience stays in a state of moral tension during the whole performance. First of all, this is due to the expressive means used by the director. Together they create atmosphere of suspense surrounding the audience and the characters. If you try to categorize the performance as something beautiful or sublime according to Kant’s terminology, then I think it may be regarded as something sublime, even dynamically sublime what makes you enjoy it by fear and horror.