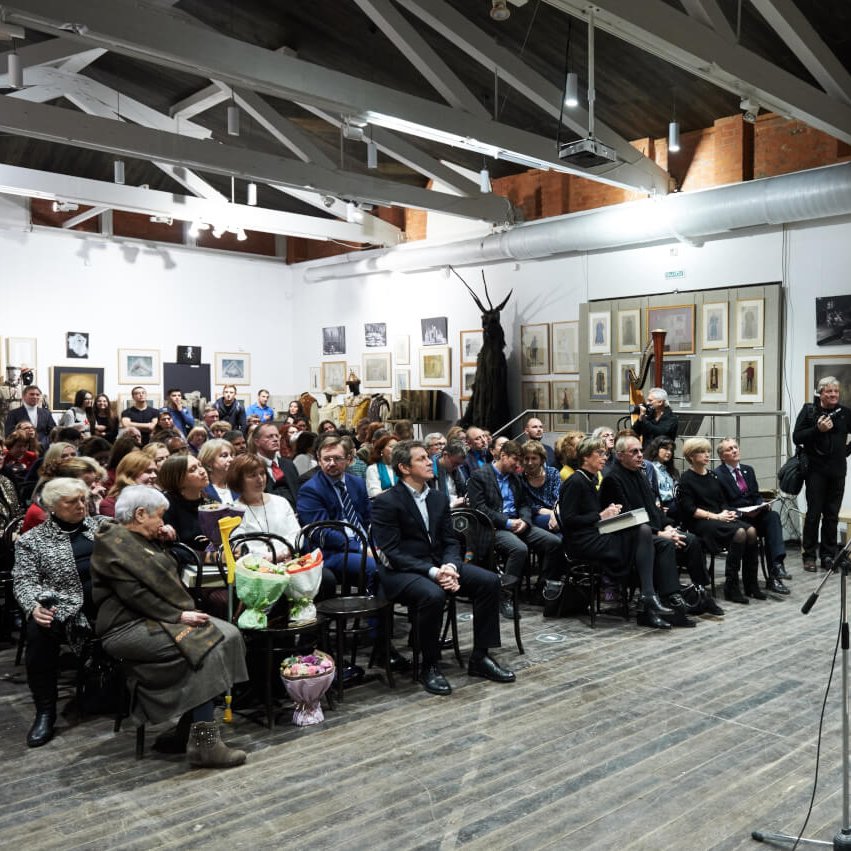 The solemn ceremony of awarding of the unique annual Theatrical Literature Prize «Theatrical Novel», established by the A.A. Bakhrushin State Central Theatre Museum in 2014, was held at the Coach House of the Bakhrushin Museum’s Main Building on December 13. The awards were presented for the fourth time.

According to the decision of the Prize Jury, headed by the Chairman Konstantin Raikin, People’s Artist of Russia, the winners of the Prize 2017 became the publishing house Art-Volkhonka (Irina Lebedeva, director) for the publication of the books C. Gozzi. Turandot, M. Maeterlinck. The Blue Bird and S. Topelius. Adalmina’s Pearl, Aleksandr Filippov for the book The Chamber Theatre. Book of Memoirs, Margarita Laskina for the book Oleg Okulevich. Voice of the Heart – on Stage and behind the Curtain (from Actor’s Archive), Dmitry Trubochkin for the book Ancient Greek Theatre and Nonna Skegina for the book Anatoly Efros. A Living Corpse.

Also the publishing house NAVONA was awarded with a special diploma of the Prize for the active publishing activity in the field of literature about the theatre.

The Prize Jury Members /Dmitry Krymov, Galina Tyunina, Dmitry Trubochkin and Felix Korobov/ congratulated the winners and emphasized the importance of supporting the publishing of theatrical literature. Konstantin Raikin and Felix Korobov were unable to attend the ceremony due to work, but they recorded warm and soulful video messages for guests and winners. «I regret very much that I can’t attend the Bakhrushin Museum, this wonderful place this time. I am very sorry that I am so busy doing work in my theatre and my institute and can’t be with you today. I got great pleasure once again, looking through these books that will be discussed today. I will be very happy to have them in my theatrical library», Konstantin Raikin said in his video message.

The nominees of the Prize 2017 and the winners of past years, the members of the Board of Trustees /Hugo Erikssen, Aleksey Voskresensky and Valery Yakov/ and the Expert Council /Marina Timasheva, Marina Tokareva, Nikolay Pesochinsky, Elena Dunaeva and Dmitry Rodionov/ also took part in the awarding ceremony. Aleksandr Zhuravsky, Deputy Minister of Culture of the Russian Federation, Yury Ilyin, actor of the Maly Theatre, Grigory Zaslavsky, Rector of the Russian Institute of Theatre Arts – GITIS, Yevgeny Knyazev, Rector of the Shchukin Theatre Institute, Nikolay Sheyko, theatre and cinema director, Head of the Literature Department of the Chekhov Moscow Art Theatre, Aleksey Bartoshevich, Professor of the Russian Institute of Theatre Arts – GITIS, visited the ceremony as well as leading theatre critics and artists.

During the ceremony students of the Russian Institute of Theatre Arts – GITIS /Studio of Valery Garkalin and Elena Shanina, People’s Artists of Russia/ performed in 1970’s retro style musical shows.

The constant partners of the Prize «Theatrical Novel» are the «Tarlo and Partners» Bar Association, the «State of Law» Foundation, the Cuellar Design Company, the Moscow Brewing Company and the Gus Crystal Plant. In 2017, the pastry factory «Etery», a new partner of the Prize, made a special cake with the symbolics of the Prize for this ceremony.

The Bakhrushin Museum expresses great gratitude to the partners, as well as to all those who helped and supported the participants and organizers of the Prize.