History of museum and its collection 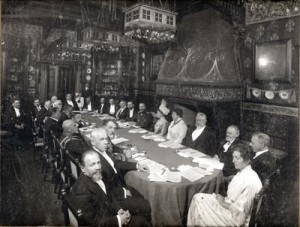 Alexey Alexandrovich Bakhrushin showed his collection to public for the first time in 1894. Since there and until 1913, when the collection was transferred to the Russian Imperial Academy of Sciences, the first period named by chief museum curator M.D. Prygunov as “a period of primary wealth accumulation” has been lasted. These years the collection was in private ownership of A.A. Bakhrushin and general public couldn’t have access to it. But in theatre society one began to talk about it with increasing gravity. During this time the young museum has participated in seven exhibitions, one of which was held in Berlin in 1905 and generated great interest largely thanks to the A.A. Bakhrushin collection.

Next period in museum life began on 25 November 1913, when the act of its transfer to the Russian Imperial Academy of Sciences took place. Theatre and Literature Museum of the Academy of Sciences received statute and staff, registration of collection pieces was launched and corresponding inventory books appeared.

After revolution, the museum survived two difficult years. According to contemporaries, the collection was at risk of plunder and it would have happened if a people’s commissar for education, A.V. Lunacharsky, hadn’t provided a platoon for defending the museum. Another problem was a safety of collection, because rooms weren’t heated and valuable exhibits could have suffered over humidity and temperature range. One more problem was the “ideology” of museum – the “class” nature of museum and its “capitalist” essence were discussed; museum and its collection faced a threat of total destruction.

Period of uncertainty finished on 1 February 1919, when museum became an institution of the People’s Commissariat for Education. Government began to allocate money for its maintenance and it allowed recommencing scientific and excursion activity that was difficult during the war and the revolution.

By this time museum collection was located in 25 halls, 14 of which were opened for public twice a week. Museum staff at that time was represented by 12 persons /now – around 250/.

In its scientific activity museum was connected to the theatre section of the State Academy of Artistic Sciences. This organisation initiated a celebration of 30th anniversary of the museum in 1924.

All these years the head of the museum was its founder Alexey Alexandrovich Bakhrushin. His merit in saving the integrity of the museum in difficult times is huge. Besides, the considerable and probably the best part of today’s museum collection was gathered thanks to his great energy and flair for art.

Bakhrushin proved that one couldn’t be born as collector and museum founder of national or even world scale, but become. Before museum appearance, Bakhrushin was rather an amateur and his passion wasn’t unusual: collecting was quite ordinary hobby for people of his circle. However, only for few people this hobby became a matter of life. Having made great efforts, Bakhrushin gradually improved the mechanisms of the collection replenishment and opened the new methods of getting desired exhibits. He became a regular visitor of antique stores and markets, met more people from theatrical world. Thanks to his contacts, the museum received as donation many valuable objects. Little by little Bakhrushin made contacts with several “agents” – familiars in different cities of Russia and Europe he corresponded with and learned in time about possibilities to buy something exciting for museum. Collection has been replenished also owing to Bakhrushin trips abroad. Thus, Alexey Alexandrovich began to wonder about foreign theatre.

After revolution, when Bakhrushin lost his fortune, ability to collect became much more difficult. But in this situation he was able to manage little funding that was allocated to museum for purchases in the right way. He was also able to bargain, find extra money and negotiate about purchase by instalments. His good reputation, authority and personal contacts in the People’s Commissariat for Education played an important role. Bakhrushin had contacts in the world of antique dealers /however, they lost by then their importance because antiquities trade was fallen on hard times/ and collectors. He jealously followed up on their activities, sometimes collectors purchased valuable objects, sometimes some “friendly absorptions” had place: by 1924 museum received wonderful collection of S.I. Zimin, which he refused to transfer in 1914 /conditions proposed by Zimin were unacceptable for museum at the time/. Museum collection was replenished also owing to selection of object in the national museum fund, where private collections were transferred after nationalization.

Bakhrushin made a lot for saving the theatre culture in those years. But for his collector talent, many archives and art objects, which are today a matter of pride of collection, would have been lost forever. For example, there are the Sadovsky family archive, the P.G. Stepanov collection of porcelain statuettes-caricatures, a part of Imperial Theatres Direction archive, etc.

Collector talent of Bakhrushin was seen not only in skilled search and purchase of objects, but also in the fact that he could make his museum not a “personal collection” that reflects tastes of its owner, but all-embracing collection of national significance showing the history of Russian and Soviet theatre in its whole entirety – with contradictions, mistakes, struggle of “new theatre movements” with the past and among themselves. Bakhrushin personal theatre tastes were formed under the influence of the Maly Theatre of the late XIX century. Maly Theatre remained for Bakhrushin the favourite theatre, however that didn’t prevent him from collecting many impressive materials related to the Moscow Art Theatre, Vsevolod Meyerhold creative work, that didn’t stop such works to appear at the museum like the works of Ferdinandov, Exter /A.A. Bakhrushin Theatre Museum owns the most complete collection of her theatre designs/, Tatlin, Rabinovich, Lentulov, Goncharova and many others. Bakhrushin was able to successfully develop such skills like capacity to understand, appreciate many kinds of art and be right in assessment.

With Bakhrushin’s generation, which S.I. Shchukin and A.V. Morozov belonged to, the brilliant epoch of merchant collecting went back to the past. Certainly, collecting continued to exist, but it was impossible to reach such dimension.

After Bakhrushin’s death, museum remained his successor, trying like his founder to carefully keep and enlarge collection that reflects the real and comprehensive tapestry of the history of theatrical Russia, despite all the turns of the political history.