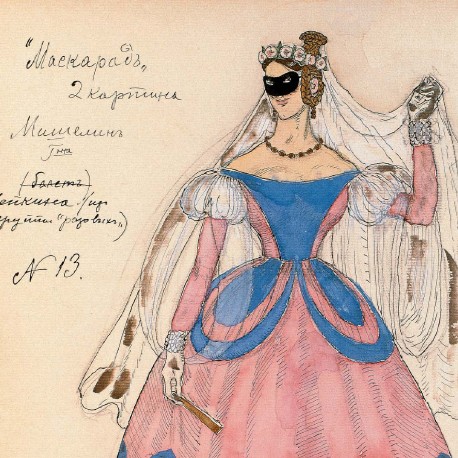 
The exhibition «Russian Empire’s Last Performance: «Masquerade», dedicated to the Alexandrinsky Theatre’s tour with the play by Valery Fokin’s «Masquerade: Memories of the Future», will open from September 9 in Museum and Choir Halls of the Bolshoi Theatre. The exhibition and the tour are devoted to the hundred years from the opening night of the last performance played on Imperial stage, which was the «Masquerade». The first night took place on February 25, 1917, in Petrograd, during the February Revolution. The exhibition presents the materials dedicated to the history of the Direction of Imperial Theatres (1766-1917), which stopped to exist a hundred years ago, but because of its help and effort the performance took place.

The «Masquerade» is a legendary masterpiece made by Meyerhold and Golovin, which has been created during 6 years. The director and the stage designer succeeded to create the unique atmosphere of the carnival, play and masque, reminding of the masquerade Venice in XVIII century. The Golovin’s great skill of stylization and the Meyerhold’s genius united the whole sphere of different art movements: romanticism, empire and symbolism, involving the features of mystery play, tragedy, carnival, pantomime and harlequinade.

Director’s creative vision was really grandiose: «Masquerade» became the most expensive performance of the Imperial Russia, theatre critics called it «a requiem for the passing epoch». The lush scenery served as a direct reflection of the luxurious hall of the Imperial Theatre. The production has been played until August 1941, when Golovin wasn’t actually alive, when Meyerhold was shot and his name did no longer appear on the playbill. In a concert version without scenery the performance was on the stage of the Leningrad Philharmonic until 1948.

Meyerhold-Golovin’s «Masquerade» synthesized all the achievements of the Russian pre-revolutionary theatre and foresaw new directions in the theatrical art of the future. He influenced the work of such European directors as B. Brecht, E. Piscator, G. Craig and became an example for S. Eisenstein, artists V. Dmitriev, K. Petrov-Vodkin, succeeding generations of actors and directors.

The exhibition displays more than 125 sketches of Golovin from the A.A. Bakhrushin Theatre Museum’s collection as well as set designs and original costumes for the «Masquerade» from the Russian Drama Museum of Alexandrinsky Theatre’s collection.

The collection of Golovin’s scenographic materials, received by the Theatre Museum in 1922, includes designs of all 10 paintings of the play, the decorative elements of scenery, props, costumes, make-up, various sketches and playbills. The scenery of the «Masquerade» was considered for many years to have been burned during the bombing, but only nowadays they were found in the distant warehouses of the production section, became museum exhibits and entered the permanent museum exposition of the Alexandrinsky Theatre.

The collaborative exhibition project of the Theatre Museum and the Alexandrinsky Theatre is a unique event in the cultural life of the two capitals, because designs and costumes from the Meyerhold’s play were never exhibited before. This display will be held in the halls of the Bolshoi Theatre for only 16 days. Moreover, on September 9 and 10 visitors will see the «Masquerade» directed by Valery Fokin, an artistic director of the Alexandrinsky Theatre, who resurrected in his original stage composition the images of Meyerhold’s grand performance based on the production score and Golovin’s sketches. Thus, visitors could see on the stage of the Bolshoi Theatre modern authentic copies of the exhibited costumes.