«Leader of the Pear Garden. Mei Lanfang and the Soviet Theatre» 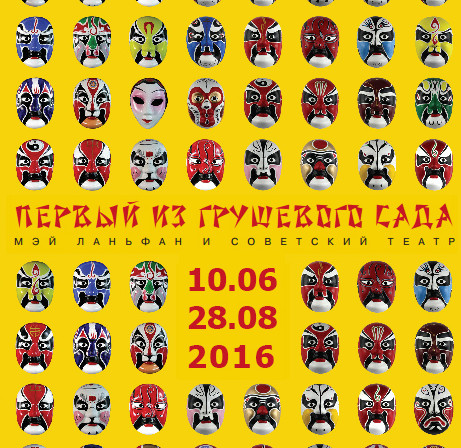 
«Children of the Pear Garden» – the ancient name given to Chinese actors who educated in the appropriate part of the Imperial Palace. The official title of Mei Lanfang – «Leader of the Pear Garden» means that he holds a superior position among Chinese artists»/Sergei Eisenstein. 1935

The exhibition «Leader of the Pear Garden. Mei Lanfang and the Soviet Theatre» will be open at the Main Building of the A.A. Bakhrushin Theatre Museum from June 10 to July 20, 2016. This exhibition is a possibility to meet the art of the unique phenomenon that has no analogues in European art – «Peking Opera», as well as the innovative work of the great artist Mei Lanfang and follow the mutual influence of Chinese and Soviet theatre cultures and their significance for contemporary theatre.

Mei Lanfang /1894 – 1961/ – the Chinese artist known for his female lead roles «dan» – dedicated his whole life to the art of Peking Opera. His contribution to the development and modernization of this genre cannot be overestimated. In 1935 he received an invitation to visit the USSR. The tour had a great success and after it Mei Lanfang donated to the Bakhrushin Museum some of his costumes, stage props, musical instruments.

The exhibition includes two large thematic parts. The first one represents Peking Opera as the unique cultural phenomenon and tells about Mei Lanfang art. Many of the exhibits will be shown to the audience for the first time. Besides the rarities from the gift of Mei Lanfang the exhibition demonstrates rare Chinese folk engravings about traditional theatre found in the funds of the Decorative Materials Department and the fund of the Meyerhold State Theatre, puppets in the form of Peking Opera characters and miniature masks of the leading artist roles from the Children’s and Puppet Theatres Funds Department of the A.A. Bakhrushin Theatre Museum. The hieroglyphic inscriptions on exhibits were translated from Old Chinese written language; the plots of images and its literary sources were determined especially for the exhibition.

The small resemblance of traditional Chinese theatre stage created at the exhibition will help to better imagine the atmosphere of Peking Opera. Unique video records of the performances with participation of Mei Lanfang will be shown at the back screen.

The second part of the exhibition is dedicated to the Soviet drama and musical theatre in the middle of 1930’s, its heyday. During the tour in Moscow and Leningrad Mei Lanfang saw the best performances of that time. They are presented at the exhibition with playbills, costume and decoration designs, photos of artists and performances. There are «The Barber of Seville» and «Boris Godunov» of the Stanislavsky Opera Studio, Meyerhold’s «The Lady of the Camellias» and Vakhtangov’s «Turandot», Tairov’s «Egyptian Nights» and Okhlopkov’s «Aristocrats», ballets, puppet performances… There are also photos of leading representatives of Soviet theatre and art with Mei Lanfang.

During the work of the exhibition the following events will be held: lectures dedicated to the specificities of music, action, costumes, makeup, roles of artists in a Chinese theatre; concerts of the leading performers of the Moscow Tchaikovsky Conservatory with traditional instruments of Peking Opera; showing of the performances with participation of the leading modern Chinese masters of this unique genre.

ABOUT MAI LANFANG AND HIS VISITS TO USSR

In 1935 Mei Lanfang was invited to visit the Soviet Union. In Moscow and Leningrad the artist and his troupe showed four performances: «Revenge of the Oppressed», «Rainbow Pass», «Fei Chen-O and the «Tiger» General», «The Drunken Beauty» as well as several dance performances. The famous persons of theatre and cinema of the first half of the 20th century visited these productions: Konstantin Stanislavsky, Vsevolod Meyerhold, Alexander Tairov, Sergei Tretyakov, Edward Gordon Craig, Sergei Eisenstein and Bertolt Brecht. Sergei Eisenstein made a film with participation of Mei Lanfang «Rainbow Pass» /rare photos from the shooting of the film are included in the exhibition/.

After a two-week tour in Moscow and Leningrad the artist was asked for additional performance that took place on April 13 at the Bolshoi Theatre. According to spectators, the performance continued until 3 AM and appreciative audience thanked Mei Lanfang 18 times with a curtain call.

The artist described the purpose of his tour: «On the one hand I want to introduce traditional Chinese opera abroad and on the other hand I use this opportunity to learn a foreign theatrical art and enrich our traditions». During the tour Mei Lanfang visited the huge amount of drama, opera performances and film screenings. His trip became a unique cultural exchange, which contributed to the development of Eastern and Western art.

After the formation of the People’s Republic of China Mei Lanfang visited the Soviet Union three times: in 1952, 1957 and 1960. Foreign trips of Mei Lanfang opened Peking Opera to the world and popularized the traditional Chinese art in other countries. Now «Peking Opera» is recognized by UNESCO as intangible heritage of the world culture.