The Museum-Estate of M. N. Yermolova /The Theater Salon on Tverskoy Boulevard 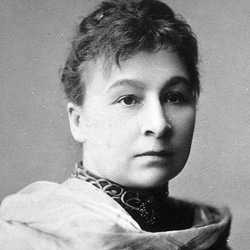 Cleaning Day: The last Friday of the month

The House Museum of Mariya Nikolayevna Yermolova /1853-1928/, Honoured Actress of the Imperial Theatres, People’s Artist of the Republic /1920/, is situated in the mansion of the late XVIII century, where the great actress has lived from 1889 to 1928.

Exhibition of the House Museum includes three parts in three floors of the house. The first floor is devoted to childhood of the future actress, studying and debut on the stage. The second floor is ceremonial. Suite of rooms begins with the floor «Debut», devoted to the main part in the play of G.E. Lessing «Emilia Galotti». Due to photos made during lifetime of the actress, the interior of Yermolova’s study was restored with great accuracy. Exhibition shows the most significant parts of the actress, performances and her entourage. There is also her dressing room – a reconstruction of the one that was in the Maly Theatre, where she was the star.

Famous portrait of the actress by V.A. Serov is made in the magnificent White hall of the mansion. According to traditions of the great mistress, the concerts, spectacles and theatrical meetings are held in the hall today.

The third floor is private. Going up the narrow wooden stairs, one can get to a spacious dining room, where the mistress received her friends. Actress bedroom remembers, how Mariya Nikolayevna rehearsed her part behind a large mirror of a wardrobe. Magnificent memorial piano and furniture collection are stored in the Green living room. Glass doors lead to the balcony, where on 2 May 1920, the day of celebration of 50 years of her creative activity, Mariya Nikolayevna met a demonstration of theatrical figures with banners «Glory to Great Yermolova!»