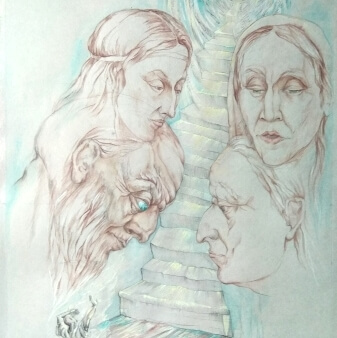 The exhibition «Rainbow’s Sacred Song. Irene Kistovich. Synthesis of Music and Painting» is open from September 13 at the A.A. Bakhrushin Theatre Museum.

The artist comprehends the biblical texts in her works. Kistovich says that her «goal in contemporary art is to show the relevance of a return to the Bible as not a retrograde movement, but a way of understanding the true form of being of matter». Irene discovers again and again the relationship between the meaning and words in the Old Testament, the Bible.

The artist conveys a sense of movement in her paintings, because the movement for her is a path to ascent, a prayer of a man seeking his way. She turns the sound of the Old Testament texts into the painting. Meanwhile, the artist’s style depends on the texture and color of the paper.

«White is like marble – cut off all that is superfluous! Tinted paper gives material for experiments with technique», Irene Kistovich says.

Irene Kistovich graduated from the Roerich Art College and the Repin Institute of Painting, Sculpture and Architecture in St. Petersburg. She is an author of projects in the technique of three-dimensional stone-cutting mosaic and an author of many catalogs and books on the art of the Ancient and Modern East. Member of the Union of Artists.