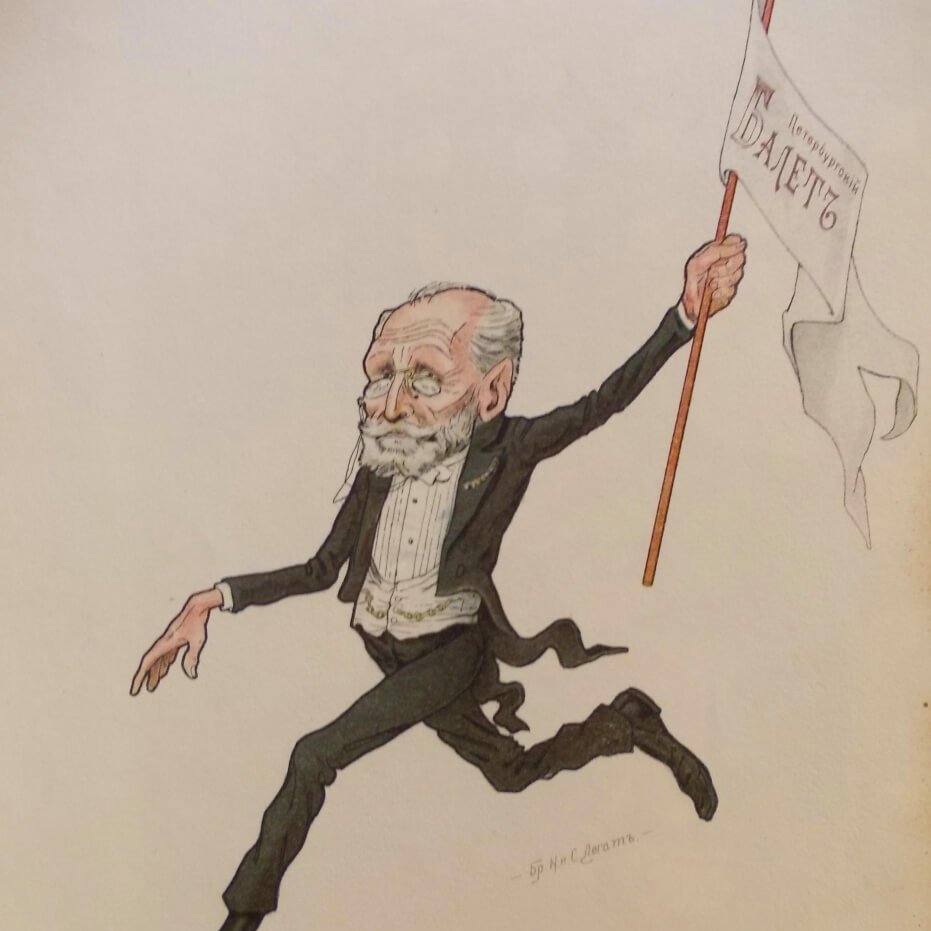 The international research conference “MARIUS PETIPA’S BALLET EMPIRE: FROM RISE TO DECLINE” is hosted by the A. A. Bakhrushin State Central Theatre Museum, the State Institute of Art Studies and the State Academic Bolshoi Theatre as part of the Year of Ballet in Russia and state-sponsored events dedicated to the eminent choreographer’s bicentenial, with support from the Ministry of Culture of the Russian Federation.

The research forum coincides with the date (May 24 old style, June 5 new style) of the contract concluded between Marius Petipa (1818-1910) and the Directorate of the Imperial Theatres, initially for just one year, and then permanently.

Before coming to Russia and mounting a brilliant career as a choreographer, Marius Petipa completed a long creative journey. When he was just five years old he appeared on stage as Cupid in the ballet Cupid and Psyche, choreographed by P. Gardel. In 1827 he performed his first significant role, as Fernand in the play Jocho, or the Monkey of Brazil, as depicted in a portrait preserved in the collection of the Bakhrushin Museum. Before coming to Russia, Petipa worked as a dancer in the theatres of Nantes (1839-1842), Paris (27 October 1842), Bordeaux (1843/1844 season), and with particular success in Spain in the Teatro del Sirco (1844-1847).

Invited to Russia by the Directorate of the Imperial Theatres as a dancer in 1847, Petipa immediately made his debut as a ballet master, staging Paquita in St. Petersburg after the Mazilier ballet that had been premiered in Paris. In 1862, he was officially appointed choreographer for the St. Petersburg Imperial Theatres, and in 1865 he became chief choreographer. In 1894, Petipa accepted Russian citizenship.

Petipa was born in France and spoke French all his life, but it was in the two capitals of the Russian Empire – St. Petersburg and Moscow – where he found the ideal conditions to realize his talent. Petipa came to Russia at age 29 and ended up living and working here the rest of his life, more than half a century. Marius Petipa staged over 60 ballets with the Imperial Theaters: Sleeping Beauty, Swan Lake (in collaboration with Lev Ivanov), Raymonda, La Bayadère, Don Quixote, and others. Many of his ballets are still kept in the contemporary repertoire as outstanding examples of the choreographic heritage of the 19th century.

In his memoirs Petipa called Russia his second homeland, one that he did not leave through to the end of his life. Summing up his life in the memoirs written in his declining years, he appends significant phrase: “Remembering my career in Russia I can say that it was the happiest time of my life… God bless my second homeland, which I love with all my heart.”

The great choreographer died in 1910 in Gurzuf and was buried at the Tikhvin Cemetery of the Alexander Nevsky Monastery in St. Petersburg. With his death, the “Era of Petipa” did not, however, end. The “Ballet Empire” he created began to expand its borders.

The conference embraces a broad range of issues for discussion: Marius Petipa’s contribution to the history of ballet around the world and his place in modern ballet; the historical role of the choreographer and choreographic notation; aspects of the development of ballet and the science of ballet in recent times; ballet theatres’ adaptation of new styles, and so forth.

The conference program includes the following plenary sessions and panels.

SOURCE STUDIES AND “FOLKLORE” (Petipa’s work as viewed through documents and reconstructions, as well as the oral interpretation of his heritage, analyzed in interviews about Petipa with choreographers, composers, designers, and critics).

GEOGRAPHY AND LANGUAGES: PETIPA’S LEGACY ON THE WORLD MAP (the transfer and revival of Petipa’s ballets in the West and Russia; the problem of adapting choreography for different choreographic schools and countries; the guardians of Petipa’s heritage in the USSR and in the West).

A FOREIGN ARTIST IN THE SERVICE OF HIS MAJESTY (relations between choreographers and the imperial and theatrical bureaucracy; the status of the French diaspora within the Russian Empire; opportunities and restrictions for foreign nationals).

ALLIES AND SUBJECTS: The ballerina in Petipa’s productions

ALLIES AND SUBJECTS: Petipa and his staff working on ballets (competitors and pupils; relationships with co-authors, employees, performers, librettists, designers, and actors).

THE BORDERS OF THE EMPIRE: artistic connections and parallels (Petipa’s creativity within the context of the theatres of his time).

ECONOMICS AND SOCIETY (the government and the arts; the administrative and financial functioning of 19th century ballet theatre in documents, contracts, and concrete details; production costs and fees; the social status of ballet and its audiences).

PETIPA TODAY: BRAND OR KITSCH? (perspectives on reconstruction; the preservation and study of classical ballet in general and Petipa’s ballets in particular; the potential for traditional models in digital adaptations).

PROGRAMME OF THE RESEARCH CONFERENCE

Dmitry Viktorovich RODIONOV, director in chief of the A. A. Bakhrushin State Central Theatre Museum

Nataliya Vladimirovna SIPOVSKAYA, director in chief of the State Institute for Art Studies, Doctor of Arts

“Have choreography, will travel”: Sketches and transcriptions of choreography of the XIX century in the collection of the Houghton Library, Harvard.

Pantomime in the ballets of Marius Petipa

Acting in dance in the choreographic notations of Henri Justamant: Undine by J. Perrot and C. Pugni.

Petipa and problems of authorship in Giselle

Ballet notation as an axiom or an excuse for creativity

What about the music: the reenactment of steps from the ballets Faust, Trilby, and The Magic Mirror (based on the materials in the Harvard Theater Collection)

The reconstruction of Marius Petipa’s ballets based on V. Stepanova’s system of notation: A personal experience

CONTINUATION OF THE CONFERENCE

Panel 1: A FOREIGN ARTIST IN THE SERVICE OF HIS MAJESTY

The case of the apple and the cat: “Incident Reports” in the Imperial Theatres bureaucracy (with reference to the letters of M. I. Petipa and A. N. Verstovsky to A. M. Gedeonov)

I. Petipa’s diaries in the context of the French memoir literature

Petipa’s epoch in the memoirs of the Mariinsky Theatre ballerina Yevgeniya Biber (based on materials from the holdings of the A. A. Bakhrushin State Central Theatre Museum)

Panel 2:  ALLIES AND SUBJECTS: The ballerina in Petipa’s productions

The representation of the body in choreographic performance in Russia and France, 1840-1914-s

Appearance and skill of the classical ballerina in Petipa’s epoch

Italian dancers in Marius Petipa’s ballets. The calm before the storm: Virginia Zucchi in Russia prior to her reception on the imperial stage

GEOGRAPHY AND LANGUAGES: PETIPA’S LEGACY ON THE WORLD MAP

The fate of M. I. Petipa’s ballets on the Mariinsky stage in the post-revolutionary years

The first staging of the ballet Swan Lake in Estonia. From archival materials in the Estonian Theatre and Music Museum

Petipa: from Diaghilev to the “Ballets Russes de Monte-Carlo” (1932-1957), according to the recollections of participants

Petipa in the United Kingdom: Press responses to N. G. Sergeyev’s stagings in the 1930s and 1940s.

From Russia to France: The role of Nureyev in the extension of the Petipa repertoire

Raymonda in the Mariinsky Theatre, 1993: Yuriy Grigorovich vs Konstantin Sergeyev

I. Petipa’s ballets on the Kazan stage

CONTINUATION OF THE CONFERENCE

Panel 3: THE BORDERS OF THE EMPIRE: Artistic connections and parallels

Lucien Petipa as choreographer: The example of the ballet Bacchanale

Paris Market on the stage of the Paris Opera (1861)

Roxanne, the Beauty of Montenegro: The Slavic Giselle

Prussia: theatre and authority in the 19th century

I. Petipa’s creativity as perceived in Russian society

I. Petipa’s creativity as reflected in the criticism of S. N. Khudekov (based on periodicals of the 19th century)

ROUND TABLE “CHOREOGRAPHY AND COPYRIGHT”

MODERATOR: Alexander Yakovlevich Rubinshteyn, first vice director of the Institute of Economics of the Russian Academy of Sciences, head of the Economic Sector of the Department of the General Theory of Art and Cultural Policy of the State Institute for Art Studies, Doctor of Economic Sciences.

PARTICIPATING IN THE ROUND TABLE:

Panel 5:  ALLIES AND SUBJECTS: Petipa and his staff working on ballets

The scores that were written according to M. I. Petipa’s scripts and scenarios: Musical content and theatrical adaptation (The Vestal by M. M. Ivanov, Sleeping Beauty by P. I. Tchaikovsky, Bluebeard by P. P. Shenka, Raymonda by A. K. Glazunov, and The Magic Mirror by A. N. Koreshchenko)

On the history of the ballet The Vestal (based on materials from the Institute of Russian Literature of the Russian Academy of Sciences, “Pushkin House”)

Why was The Magic Mirror (Le Miroir Magique) a “fatal mirror”?

100 years of Petipa: Where have we arrived?

I. Petipa and his compositional work

I. Petipa’s choreography: The secret of the viability of the tradition (the example of La Bayadère)

Petipa in the digital epoch